Trilok Gurtu is one of the most inventive percussionists of all time. I was thrilled to have a chance to sit down and talk with him and renaissance man Christopher Janney.

A world class, virtuoso percussionist, now in his mid fifties, Trilok has attracted a world class set of collaborators over a long career; these started with John McLaughlin in whose trio, Trilok flourished as the featured soloist for 4 years, other jazz greats continued this path – Joe Zawinul, Jan Garbarek, Don Cherry, Bill Evans, Pharoah Sanders, Dave Holland were all attracted to Trilok’s burning sense of rhythm. Of course he is deeply rooted in the Indian tradition, so it is no surprise to see that collaborations also took place with the glitterati of Indian musical society – his mother, Shobha Gurtu, Zakir Hussain, L. Shankar, Shankar Mahadevan, Hariprasad Chaurasia, The Misra Brothers and Sultan Khan. World music has become an established genre in which Trilok has further “ploughed his own furrow” with his own group, to great effect, performing and recording with Salif Keita, Oumou Sangare, Angelique Kidjo, Neneh Cherry, Omara Portuondo, Tuvan throat singers, Huun Huur Tu, to such effect that . Rita Ray of BBC Radio described him as “a serial collaborator”. 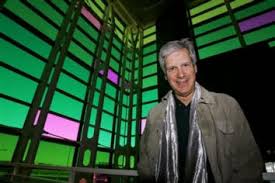 Christopher Janney  is an American composer/artist/architect known for his work on the interrelation of architecture and music. Sometimes he attempts to make architecture more like music as in his sound sculptures titled “Urban Musical Instruments” of which “Soundstair” (musical stairs)and “Sonic Forest” are examples. Other times, he develops performance projects which make music more like architecture as in his “Physical Music” series which includes “HeartBeat,” a piece danced by Mikhail Baryshnikov. Much of Janney’s permanent work has sought to create “permanent participatory soundworks for public spaces,” including installations for airports in Dallas, Boston, Miami and Sacramento, Atlanta and the New York City Subway.

Janney has toured his “Sonic Forest” in both the US and Europe at major music festivals including Bonnaroo and Coachella as well as Glastonbury and Hyde Park Calling in the UK.

A book on his work, titled Architecture of the Air was released in February, 2007.