Jump  six and half minutes into this podcast and you’ll hear music as organic as it gets: a group of children playing traditional rhythms on pots and pans as they sing the songs of their village.  Tom Rossi recorded this  25 years ago as he was biking from from Lome, Togo to Accra, Ghana.

The podcast continues with Tom’s recordings with the all-star world musicians of New York City, Yacouba Cissoko, Dave Eggar, Matt Kilmer, Rob Garcia and many others and to top it off Tom performs live on the Kora of his own invention. 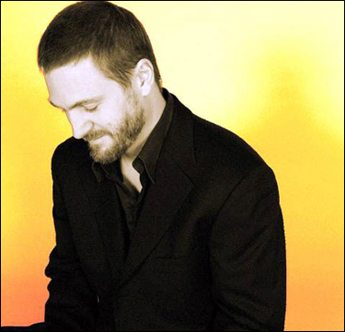 Tom Rossi is a composer, producer, songwriter and multi-instrumentalist, whose musical style is indeed a global mosaic, a border-dissolving symphony of tones and beats and harmonies from Africa and Asia and the Middle East, South America and the Caribbean and Brooklyn, USA.

Rossi himself was born in Texas, raised in Massachusetts, and went to college in the Pacific Northwest, but a moment of transformation came in a village of unpaved roads and mud huts in Togo, where Rossi grasped the raw psychotropic power of music in voodoo ceremonies.

Already an accomplished guitarist, Rossi kicked his polyglot education into a high gear. He went to Ghana to enroll in a drum and dance school run by the master percussionist Mustapha Tetty Addy.
After returning from further expeditions to Brazil, Cuba and Turkey, Rossi released his world music debut record, Salma Har, in 2005.

Drawing from his talents as a musician and his love for humanity, Tom Rossi gives peace and serenity to those facing the most difficult time in their lives… their death.

His travels around the globe have not only given Tom a broad musical education, but a unique perspective on humanity as well.

During six months of arduous recovery from a surgery to remove a debilitating blood clot, Tom taught himself the kalimba, a South African thumb piano. Through music, he created an atmosphere which helped to facilitate his healing process and alleviate much of his stress and pain.

Upon his recovery, Tom immediately enrolled at the IM School of Healing Arts in Manhattan where he spent six years studying the art of healing and developed ways to channel it into his music. He now plays for terminally ill patients in Hospice care several days a week.

“I sing softly and play either the kora, kalimba or guitar. The music is not performance, but creating an atmosphere for the patient and family to relax, savor the passing moments or to bring new energy into what can easily become a dark place. The patients and families remind me of how precious life is, how important it is to keep growing towards fulfillment and to enjoy, and how something so simple and sincere can touch so deeply.”

Tom’s efforts have helped literally hundreds of families, prompting many of them to write poignant, moving letters of gratitude…

“Thank you again for being such a warm, shining light – showering others with the peace that is so obviously within your heart and soul. You will always be in my heart, Tom, and I will never forget the gift you gave to my mom… and to me.”

“It’s been difficult to be with my Mom these days, but listening to your heavenly sounds puts a totally different perspective on things. I know that you will always be remembered in my heart as someone who was ‘there’ through these times.”

“David loved the music. He said it relaxed him. He passed away today and he was listening to your music when he did. I feel that you led him peacefully toward his light, and I am forever grateful.”