The Hills and The Rivers and  Cousin Boneless bands perform Street Folk Music. 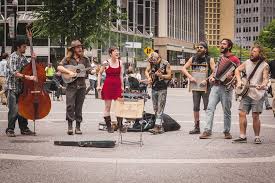 The Hills and The Rivers

This band formed when Isaac Hill and his sister Heidi began recording an album of Isaac’s new songs. Gathering their street musician friends together they formed a band that became bigger than the initial project.

They’re trying to raise funds in the next week or so to buy a van to more efficiently tour.  If you’d like to support them, check out their indiegogo campaign.