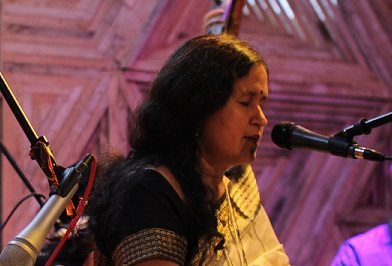 Another amazing night at the Art Cafe.  Shunbhangi Sakhalkar began the evening with this ethereal performance of Rag Bihag

Shubhangi Sakhalkar brings a brilliant pedigree to her music. After her early tutelage with Smt. Kunda Vaishampayan, she spent several years learning from the renowned artistes Dr. Prabha Atre and Smt. Padma Talwalkar.
In addition, Shubhangi has brought her own ardent riyaaz, creative imagination, and keen intellect to bear upon her art. She has developed a dynamic yet thoughtful vocal style that remains rooted in tradition while being uniquely her own. Besides accompanying her guru in concerts all over the country, she has performed in several musical circles in cities in India including Mumbai and Pune.

After moving to the United States in 1992, Shubhangi has captivated music aficionados with numerous charismatic concerts from coast to coast. Some of the cities where she has performed are Atlanta, St. Louis, Minneapolis, Phoenix, San Jose, and Los Angeles. Some of her more prestigious concerts include a SPICMACAY concert at U.C. Davis, a concert hosted by Lata Mangeshkar Foundation U.S.A. where she was accompanied by Ustad Tari Khan, and Basant Bahar’s first annual music festival where she was accompanied by Pt. Swapan Chowdhari and Pt. Ramesh Mishra. Her energetic yet melodious singing has met with enthusiastic appreciation and has created many fans in several U.S. cities.

A gold medallist with an M.A. degree in Hindustani classical music, Shubhangi believes in sharing her knowledge and raising awareness about Indian Classical music. She is recognized as one of the finest artistes and teachers in the San Francisco Bay Area. She is an inspiring mentor to many students,
some of who have begun to give performances of their own.

Art Cafe is a bar and venue connected to The Village @ Gureje, an arts center and creative community that brings together artists, teachers and leaders from Brooklyn and beyond.