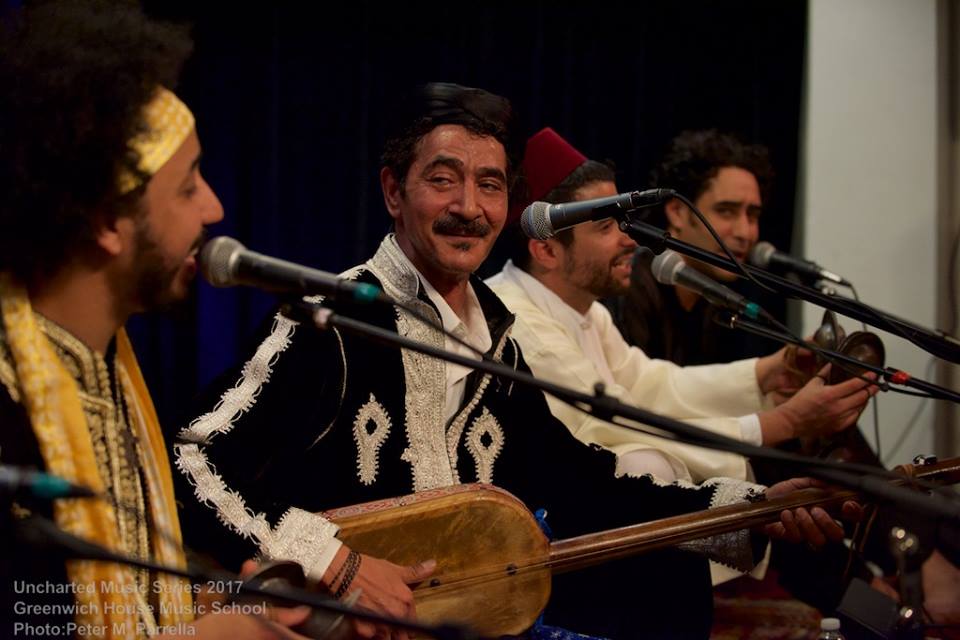 In this incredible episode we capture Innov Gnawa performing the “Sebatayin” repetoire, Gnawa music performed traditionally in Morrocco for the Jewish Community.  They performed this for the end of Passover at Greenwich House Music School as part of the UNCHARTED concert series.

The Jewish presence in Morocco dates back to over 2,500 years ago and upon interaction with the gnawa community, a bond formed over appreciation for gnawa music and its healing powers. Gnawa music pre-dates Islam and originally centered around animistic, spiritual, mystical concepts sung in sub-Saharan languages such as Bambara, Fulani and Sudani. Upon embracing Islam, gnawa songs began to incorporate Arabic language and themes around the Muslim prophets. Sebitiyin, meaning The Saturdays in Moroccan Arabic, is the collection of songs that grew out of the gatherings hosted by the Jewish community for the revered gnawa maalems whom they deeply respected. Themes of these songs still include the original elements of spirits and the natural world, and later came to incorporate shared saints from their Abrahamic traditions. Today, it is still rare to find a maalem that knows this full repertoire so we are especially lucky to have Maalem (Master) Hassan Ben Jaafer, son of the late Abdallah Ben Jaafer, lead us through a powerful moment of unity in music.

Uncharted is a concert series featuring New York-based artists premiering new projects or meeting with new collaborators for the first time on stage that has consistently drawn the attention of tastemakers and curators from across the city over the past three years. The Uncharted season delivers eclectic excellence in a broad selection of musical genres representing New York City’s diverse artistic community, including Mexican folkloric, ragtime, classical, electronic, jazz, ancient Moroccan devotional and contemporary R&B.