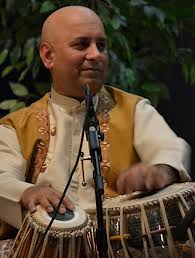 Samir Chaterjee and Dan Weiss performed a tabla duo while Arun Ramamurthy kept time on the violin.  You can hear both improvisations and compositions within this rhythmic tour-de-force. This was the third performance in the 24 hour ragas live festival.  Samir Chatterjee  was not only a performer on this year’s festival, his organization Chandayan were one of the organizers and his collaboration with David Ellenbogen in 2006 planted the seeds of the Ragas Live concept.

Samir Chatterjee is a virtuoso Tabla player from India. He travels widely across the world throughout the year performing in numerous festivals as a soloist or with other outstanding musicians from both Indian and non-Indian musical traditions. Samir performed at the Nobel Peace Prize ceremony in Oslo, Norway in 2007. He also performed a few times at the United Nations General Assembly. His compositions are widely acclaimed as well as his writings. Samir is a firm believer in the transforming effect of music on the society and all aspects of his work reflects this conviction.

Chatterjee began his studies early with Pandit Bankim Ghosh, Pt. Balaram Mukherjee, Pt. Rathin Dhar and Mohammad Salim. His later formation as a musician occurred under the guidance of Pt. Amalesh Chatterjee (since 1966) and Pt. Shyamal Bose (since 1984). All of Samir’s teachers have been from the Farrukhabad Gharana (school) of Tabla-playing, which he now represents.

Samir Chatterjee lives in the New York-New Jersey area, and has been a catalyst in the fusion of Indian and Non-Indian music, in his own creations and others as well. He performs with Pauline Oliveros, William Parker, Branford Marsalis, Ravi Coltrane, Dave Douglas, Steve Gorn, Glen Velez, Boby Sanabria, Ben Verdery, Dance Theater of Harlem, Boston Philharmonic, Minnesota Orchestra, Ethos Percussion group, Da Capo Chamber Orchestra, Boston Musica Viva and other jazz, classical and avant guard musicians and ensembles. He is member of jazz trio SYNC with Ned Rothenberg and Jerome Harris and quintet Inner Diaspora together with Mark Feldman and Eric Friedlander. He also collaborates with Sufi-Rock singer Salman Ahmad of Junoon from Pakistan. He is also the composer and director of Indo-Flame and Nacho Nacho – both blends of Indian and Flamenco dance and music, Chhand-Anand – a world percussion ensemble and Dawn to Dusk and Beyond – on the effect of music on humans and nature. He performs with Sanjay Mishra on his CD “Blue Incantation” featuring Jerry Garcia as guest artist.

Samir Chatterjee has been teaching for the last 35 years and many of his students are established performers. He is the Founder-Director of CHHANDAYAN, an organization dedicated to promoting and preserving Indian music and culture. He has authored a comprehensive 654-page book entitled ‘A Study of Tabla’ and a guide book to Indian music titled ‘Music of India’. He is on the faculty at Yale University, Manhattan School of Music, University of Pittsburgh, New School for Jazz and Contemporary Music and University of Bridgeport in CT. He also contributes to several newspapers and periodicals. He won gold medal for his proficiency in a musical examination and has two master degrees, in English and History

Since June, 2008 Samir has been working relentlessly towards the musical revival of Afghanistan. He has made several trips to the country working with different levels of the society and administration and within a very short period of time he has been able to make a remarkable difference in the cultural life of the country.

Dan Weiss started playing the drums at the age of 6 and has studied privately since he began. His main teacher as a child and teenager was Jeff Krause. While in high school Weiss studied classical piano and classical composition. He studied drums and composition at the Manhattan School of Music. His drum teacher was John for 4 years and his composition teacher was David Noon. Dan also studied frame drums with Jamey Hadaad.

Weiss has been studying tabla for the last nine years exclusively under the guidance of his guru Pandit Samir Chatterjee. He has performed classical Indian music in India and the United States, with Ramesh Mishra, Mandira Lahiri, Subra Guha, Anoushka Shankar, Joyas Biswas, K.V. Mahabala and Steve Gorn. He has also performed in recitals with his teacher in Kolkatta, India.

Weiss has two recordings under his own name. One is a solo recording which contains traditional tabla repertoire adapted to the drumset in a classical manner. His most recent recording is a trio cd which includes Jacob Sacks on piano and Thomas Morgan on bass, a recording which features his compositions. Weiss is also involved in a “doom” heavy metal band called “Bloody Panda” whose record comes out early 2007. He also plans to record his duo drum project with Ari Hoenig in mid February.

Weiss will also start contributing articles to modern drummer dealing with Indian rhythm and its applicability to western contexts. He has self published a book entitled “Tintal Drumset Trancriptions.” He has given clinics all over the United States as well as Canada and Europe. He has a loyal base of students in the New York area.