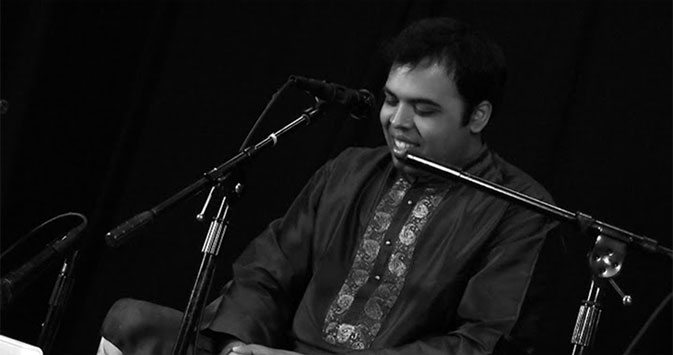 Samarth Nagarkar is described by critics as one of today’s foremost torchbearers of Indian classical vocal traditions. He is known for his eclectic, captivating performances rendered within a traditionally rich approach towards raga exposition and gayaki.

After graduating as a Grade-A scholar of the prestigious ITC Sangeet Research Academy, Kolkata, Samarth currently divides his time between India and the US pursuing an active music career as a leading performer, composer, teacher and author

One of the most talented young Violinist of India & a torch bearer of Seni – Maihar gharana, Indradeep was initiated in the art of playing Violin at his tender age of six under the able guidance of Sri Anamitra Mustafi. From the year 1991, he is under the tutelage of Prof. Smt. Sisirkana Dhar Chowdhury. He has also the privilege of getting occasional talim from other maestros of Indian Classical Music like Pt. V.G.Jog and Pt. Kumar Bose. Apart from Indian Classical Music, Indradeep has the fondness toward the Western Classical Music too, and he has received his western lessons from late Sri Samir Sil.

Along the years, Indradeep has participated in several music festivals and concerts of India and abroad like – Asia Festival in Barcelona, Memorial Concert for Chile in Koln, Biswa Banga Sammelan, Baba Allauddin Memorial Festival, Salt Lake Music Festival, Prativa Utsav organised by EZCC, Dover Lane Music Festival, Kal Ke Kalakar Sangeet Sammelan Mumbai, Kala Prakash Varanasi, Kashi sangeet Samaj, Cultural Exchange Programme organised by Kendriya Vidyalaya Sangathan in Chennai, IIT Delhi, Delhi Cant.etc and has also performed extensively in USA and several European Countries like Germany, France, Austria, Luxemburg, Spain, Denmark, Netherland etc. Moreover he has participated as a guest violin player in “Evening Live Show” & “Subha Savere” from Doordarshan Kendra New Delhi and is a regular performer from All India Radio Kolkata. He is also associated with several top grade fusion music bands like “Rhythmscape” of percussionist Bikram Ghosh and “Karma” of Subhen Chatterjee. He has composed theme music for the Kolkata Children’s Book Fair 2008.
He has to his credit many Classical and Fusion Music albums. The major among them is “Flames – The passion of Indian Raga”, where he has been accompanied on tabla by Pandit Kumar Bose.

Anirban Roy Chowdhury born in a musical family in Assam is a young promising tabla player, both as a soloist as well as an accompanist. Anirban’s training in tabla started at a very young age of 5 years from his father Akhil Roy Chowdhury and afterwards from his elder brother Animesh Roy Chowdhury.

In the year 1995, Anirban arrived in mumbai and had the privilege of getting direct training from the great tabla Maestro Ustad Allarakha Khan for a period of 7 years. Later on, he continued his training under Ustad Zakir Hussain & Pandit Yogesh Samsi, one of the senior most disciples of Ustad Allarakha Khan.

Anirban is currently a faculty member at the Academy Of Indian Music (AIM) South Plainfield New Jersey and has been regularly composing rhythms for famous Bollywood composer Jatin- Lalit.