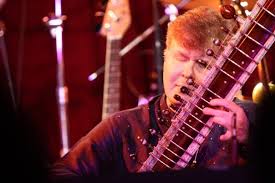 Roger Lipson performed raga Malkauns on Shenai and Saraswati on Sitar, with Stephen Celluci on Tabla and Andrew Shantz on harmonium from 8am-9am on the Ragas Live Festival 2013

Roger Lipson is currently playing bass (he’s also on sitar, vocals) with The Truants, a New York City band specializing in early garage and British Invasion rock, blues, and soul, and he also makes regular guest appearances with other musical groups. Roger has played alongside Shawn Pelton, Glen Burtnik, Larry Russell, John Korba, Dan Weiss, The Easy Star All Stars and many others. His performances include such well respected venues as the Lincoln Center Out of Doors Festival, Symphony Space, Joe’s Pub, World Live Café in Philadelphia, the Count Basie Theater and State Theater of New Jersey, and others around the country.  He was recently named aHofner Artist as an electric bass player.

Roger has played the classical music of India since 1988, and he has toured all over the country. He trained on the sitar under Pandit Krishna Mohan Bhatt of Jaipur, India, and master musician Frank Menusan of New York City. Roger also plays the shehnai (sometimes described as the Indian oboe), an historic instrument which is featured in Indian weddings and temple ceremonies. For the shehnai, Roger studied with Pandit Ustad Fateh Ali Khan, including an intensive residency in Benares, India.

As a classical Indian musician on sitar and shehnai, Roger can be heard playing sitar on The Easy Star All Stars’ #1 Billboard recording of “Lonely Hearts Dub Band” and The Cringe’s “Tipping Point”. He was a consultant to the Weinstein Company to get the Indian oboe (shehnai) into the movie Our Idiot Brother (directed by Jesse Peretz. Roger’s sitar can also be heard in other collaborations: on recent albums “The Tipping Point” by The Cringe, and “Sgt. Pepper’s Lonely Hearts Dub Band” by The Easy Star All Stars, as well as on the Nova episode “Saved by the Sun” for PBS.

Stephen Cellucci has studied tabla under the guidance of Pdt. Samir Chatterjee since 2000. He was initiated as a disciple of his Guruji in 2005 and has shared the stage with him several times since. He performed at the well-known Chhandayan All Night Concert of Indian Music in New York City in 2004 and 2009. He also has extensive experience playing with kirtans and accompanying dance — both traditional Indian kathak and western modern forms.

Stephen’s background in western classical music and piano complement his ongoing, rigorous study of Indian music. His scope of musical influences gives him the versatility to adapt the tabla to most any musical need. He resides, teaches, and plays in New York City. Contact him at sjcellucci@gmail.com.

Andrew Shantz  is an emerging keyboard improviser, vocalist and composer with a background in Jazz and an appetite for musical exploration. Since graduating from William Paterson University in 2003 with a B.M. in Jazz Studies Andrew has continued to develop his musical skill and vocabulary and in 2006 began studies of Hindustani classical music in Kolkata, India with Pandit Samar Saha and Shrimati Madhumita Saha. This year Andrew debuted his group Colors of Tarab at Alwan for the Arts in a concert featuring traditional pieces and original compositions combining elements of Indian and Arabic music and Jazz improvisation.