7-8PM During our ragas live festival 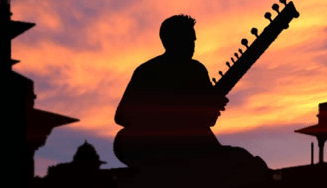 Counter to the ancient tenets of reincarnation, Andrew Mendelson attempts to live as many lives as possible simultaneously in the present. A devout student of Indian classical music, Andrew has been playing and studying the sitar for over 15 years. In 2005, Andrew won the grand championship gold medal at the Darshak Institute Music Competition in Jaipur, India–the largest music competition of it’s kind in the state of Rajasthan. He is a disciple of renowned sitarist Pandit Krishna Mohan Bhatt. Andrew continues to performed at venues throughout New York City and University campuses across the U.S. He is also a studio musician and recently composed the opening credit music for Mike Myers’ film The Love Guru.