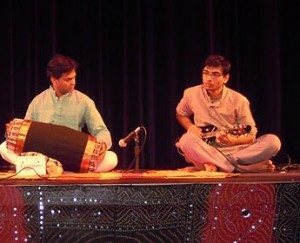 Mithun has been playing the Mandolin since the age of 10.Inspired and initiated to the instrument by the pioneer of Carnatic mandolin, Mandolin Srinivas, Mithun began performing at the age of 15. Mithun has undergone rigorous training under Vid Sri Prasanna Kumar and from renowned violinist Vid Sri TKV Ramanujacharyulu with whom he is still learning. Mithun has performed throughout India under various platforms and also been performing in New York since 2009.

A.R. Balaskandan is a performer, teacher and composer in Carnatic Violin and South Indian Percussion (Mridangam, Kanjira and Konnakkol).

As a Mridangist, he belongs to the school of Sruthilaya of Sri Karaikudi R. Mani of Chennai, where he has received advanced training from Guru Karaikudi Mani.

As a Carnatic Violinist, he initially trained under Sri Sarweswara Sarma and obtained his Teaching Diploma. He has been under the guidance of Smt. T. Rukmini of Chennai since 2000.

He has also received advanced training in Carnatic Vocal from Sri Seethrama Sharma and in general Percussion Techniques from Prof. T. V. Gopalakrishnan

Balaskandan has accompanied established international artists such as Sri O. S. Thyagarajan, Prof. T. V. Gopalakrishnan, Sri T. K. Govinda Rao, the Carnatica Brothers, the Bombay Sisters, Smt. Sankari Krishnan and others. He has also accompanied senior Bhratanatyma dancers from both India and the US.

He has been performing for over 20 years in prestigious venues around the world including India, Europe and North America. Performance credits include the Lincoln Center, NY, the Lighthouse International Theatre in NY and the Smithsonian Institute in Washington, DC.

He also has several large music and dance productions to his credit, including “Urban Kutcheri,” which premiered at the Joyce/SoHo in June 2006, “Pallavi: Exchange of Ideas between Western and Indian Classical Traditions over the Century” presented in London, “Innovation and Inspiration: A Rhythmic Project to Encourage Creativity Among Young Musicians” in London, as well as the dance dramas “Mother Theresa” and “Kastur Bhai” in Canada.

He is a featured musician on several music recordings. He is also a recognized composer of rhythmic segments, known as Jathis, in Carnatic music. He is the founder and lead artist of “Akshara,” a percussion based orchestra.

He is currently based in New York, NY, where he teaches and performs regularly.