The stellar vocalist Mitali Banerjee Bhawmik  performed with Indradeep Ghosh on violin and  Samir Chatterjee tabla from 10-11am on the 24 hour Ragas Live Festival. Engineered by Ahmet Ali Arslan 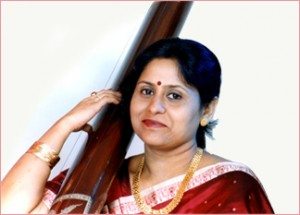 Mitali Banerjee Bhawmik, an artiste of Hindustani Classical vocal music, was born in Nogaon, Assan, where she started her initial lessons in music at a very early age from Sri Ajit Dutta.  Later she had the privilege of receiving extensive training in the different styles of Hindustani Classical vocal music from Sri Biren Phukan in Guahati, Assam.  For further training, Mitali came to Calcutta in 1983 where she initially received lessons from Srimati Meera Banerjee, the noted vocalist.  Since 1984 Mitali is under the tutelage of Padmabhushan Pandit V. G. Jog the famous violin maestro. Pandit Jog’s vast and extensive experience in the different musical styles and traditions have helped Mitali to blend the best of few styles (Gharanas) in her music in contrast to sticking to a single traditional Gharana style.  This has been the essence of Pandit Jog’s philosophy in music and training methodology.Mitali also received training in semi-classical (thumri, dadra, hori etc) music from Smt. Dahlia Rahut, a senior disciple of Smt. Girija Devi.

Her melodious voice and perfect rendition of the “raga’s” have won her numerous acclaims and appreciation from the listeners.  Besides Khayals, Mitali also specializes in semi-classical music like Thumris and Bhajans.

Mitali has a few CDs, one of them is “Vandana”, where her Guru Pandit V. G. Jog has accompanied her on the violin. She has another album, named “Rasiya” where she has been accompanied by Pt Ramesh Mishra on Sarengi and Pt Samir Chatterjee on tabla.

Mitali is the director of Ethnomedia Music Studio where she teaches Hindustani Classical Music to several students in the area.  Mitali along with her students has won the prestigious New Jersey Council of the Arts grant for four years.

One of the most talented young Violinist of India & a torch bearer of Seni – Maihar gharana, Indradeep was initiated in the art of playing Violin at his tender age of six under the able guidance of Sri Anamitra Mustafi. From the year 1991, he is under the tutelage of Prof. Smt. Sisirkana Dhar Chowdhury. He has also the privilege of getting occasional talim from other maestros of Indian Classical Music like Pt. V.G.Jog and Pt. Kumar Bose. Apart from Indian Classical Music, Indradeep has the fondness toward the Western Classical Music too, and he has received his western lessons from late Sri Samir Sil.

He is born with gifted talent of creativity and having such a strong guiding line-up, his performance has naturally became sweet, soothing, fascinating yet thrilling and is full of creative intelligence, excellent bowing technique and melody. His style of playing is a blend of ‘gayki’ and ‘tantrakari’ ang. His fortes are ‘taan’ and ‘jhala’

Along the years, Indradeep has participated in several music festivals and concerts of India and abroad like – Asia Festival in Barcelona, Memorial Concert for Chile in Koln, Biswa Banga Sammelan, Baba Allauddin Memorial Festival, Salt Lake Music Festival, Prativa Utsav organised by EZCC, Dover Lane Music Festival, Kal Ke Kalakar Sangeet Sammelan Mumbai, Kala Prakash Varanasi, Kashi sangeet Samaj, Cultural Exchange Programme organised by Kendriya Vidyalaya Sangathan in Chennai, IIT Delhi, Delhi Cant.etc and has also performed extensively in USA and several European Countries like Germany, France, Austria, Luxemburg, Spain, Denmark, Netherland etc. Moreover he has participated as a guest violin player in “Evening Live Show” & “Subha Savere” from Doordarshan Kendra New Delhi and is a regular performer from All India Radio Kolkata. He is also associated with several top grade fusion music bands like “Rhythmscape” of percussionist Bikram Ghosh and “Karma” of Subhen Chatterjee. He has composed theme music for the Kolkata Children’s Book Fair 2008.
He has to his credit many Classical and Fusion Music albums. The major among them is “Flames – The passion of Indian Raga”, where he has been accompanied on tabla by Pandit Kumar Bose.

Samir Chatterjee :
Samir Chatterjee is a virtuoso Tabla player of India. He travels widely across the world throughout the year performing in numerous festivals as a soloist or with other outstanding musicians from both Indian and western musical traditions. Samir performed at the Nobel Peace Prize ceremony in Oslo, Norway in 2007 and also performed a few times at the United Nations General Assembly. His compositions are widely acclaimed as well as his writings. Samir is a firm believer in the transforming effect of music on the society. Since June, 2008 Samir has been working relentlessly towards the musical revival of Afghanistan. He has made several trips to the country working with levels of the society and administration and within a very short period of time he has been able to make a remarkable difference in the cultural life of the country.

Chatterjee began his studies early with Pandit Bankim Ghosh, Pt. Balaram Mukherjee, Pt. Rathin Dhar and Mohammad Salim. His later formation as a musician occurred under the guidance of Pt. Amalesh Chatterjee (since 1966) and Pt. Shyamal Bose (since 1984). All of Samir’s teachers have been from the Farrukhabad Gharana (school) of Tabla-playing, which he now represents.

Samir Chatterjee is rated ‘A’ as an artiste of the national radio and television of India. He can be heard on numerous recordings featuring as soloist, accompanying many of India’s greatest musicians and in collaboration with western musicians of outstanding caliber. In concert Samir has accompanied many of India’s greatest musicians including Pt. Ravi Shankar, Ud. Vilayat Khan, Pt. Bhimsen Joshi, Pt. Jasraj, Pt. Nikhil Banerjee, Pt. V.G. Jog, Pt . Shivkumar Sharma, Pt. Hariprasad Chaurasia, M. S. Gopalakrishnan, Ud. Amjad Ali Khan, Ud. Salamat Ali Khan, Smt. Lakshmi Shankar, Ud. Ashis Khan, Ud. Shujat Khan, Pt. Ajoy Chakraborty, Ud. Rashid Khan, Pt. Tejendra N. Mazumdar, Pt. Debashish Bhattacharya, to name only a few.
Samir Chatterjee lives in New Jersey, and has been a catalyst in the fusion of Indian and Non-Indian music, in his own creations and others as well. He performs with Pauline Oliveros, William Parker, Branford Marsalis, Ravi Coltrane, Dave Douglas, Steve Gorn, Glen Velez, Boby Sanabria, Ben Verdery, Dance Theater of Harlem, Boston Philharmonic, Minnesota Orchestra, Ethos Percussion group, Da Capo Chamber Orchestra, Boston Musica Viva and other jazz, classical and avant guard musicians and ensembles. He is member of jazz trio SYNC with Ned Rothenberg and Jerome Harris and quintet Inner Diaspora together with Mark Feldman and Eric Friedlander. He also collaborates with Sufi-Rock singer Salman Ahmad of Junoon from Pakistan. He is also the composer and director of Indo-Flame and Nacho Nacho – both blends of Indian and Flamenco dance and music, Chhand-Anand – a world percussion ensemble and Dawn to Dusk and Beyond – on the effect of music on humans and nature. He performs with Sanjay Mishra on his CD “Blue Incantation” featuring Jerry Garcia as guest artist.

Samir Chatterjee has been teaching for the last 35 years and many of his students are established performers. He is the Founder-Director of CHHANDAYAN, an organization dedicated to promoting and preserving Indian music and culture. He has authored a comprehensive 654-page book entitled ‘A Study of Tabla’ and a guide book to Indian music titled ‘Music of India’. He is on the faculty at Yale University, Manhattan School of Music, University of Pittsburgh, New School for Jazz and Contemporary Music and University of Bridgeport in CT. He also contributes to several newspapers and periodicals. He won gold medal for his proficiency in a musical examination and has two master degrees, in English and History.