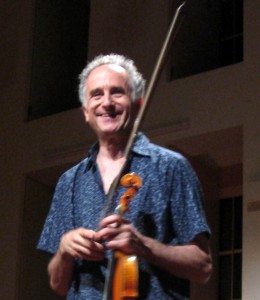 Michael Braudy is a violinist who specializes in Western classical and Celtic music and the music of India.  A versatile improviser, he collaborates with poets, storytellers, dancers, theatre and mime, and performs in the US and abroad.  He has also explored the effects of music on health, and teaches workshops worldwide on sound and meditation.  His recordings include Awakening Peace, Vriddhi, Sumanas, Celtic Afternoon and From the Ganga to the Tay.

Roger has played the classical music of India since 1988, and he has toured all over the country. He trained on the sitar under Pandit Krishna Mohan Bhatt of Jaipur, India, and master musician Frank Menusan of New York City. Roger also plays the shehnai (sometimes described as the Indian oboe), an historic instrument which is featured in Indian weddings and temple ceremonies. For the shehnai, Roger studied with Pandit Ustad Fateh Ali Khan, including an intensive residency in Benares, India.

As a classical Indian musician on sitar and shehnai, Roger can be heard playing sitar on The Easy Star All Stars’ #1 Billboard recording of “Lonely Hearts Dub Band” and The Cringe’s “Tipping Point”. He was a consultant to the Weinstein Company to get the Indian oboe (shehnai) into the movie Our Idiot Brother (directed by Jesse Peretz. Roger’s sitar can also be heard in other collaborations: on recent albums “The Tipping Point” by The Cringe, and “Sgt. Pepper’s Lonely Hearts Dub Band” by The Easy Star All Stars, as well as on the Nova episode “Saved by the Sun” for PBS.

Ravi Rao studied with Krishna Bhatt and Shahid Parvez amongst many other top players and dedicated his performance or Raga Madhuvanti to his late father.

Roshni Thompson is a NY based tabla player who hails from the West Indies, where she was initiated into the ancient tradition of indian classical music by her vocalist father. She has continued her tutelage in the Benares style of tabla playing under Shri Tapan Modak and is currently a student of the epic Farukhbad exponent, Pt. Anindo Chatterjee. While her passion is Indian classical tabla, she has played in folk, jazz and multi-genre modalities. Roshni has performed at notable local venues such as Pianos, Knitting Factory, The Bitter End, The Shrine and Tea Lounge.