The weekly Brooklyn Raga Massive Jam Sessions have an incredibly deep bench. The same night Neel Murgai proposed in 7.5 beats (podcast 139) the next set was Max ZT and Ehren Hanson.

This recording sounds particularly good because it was mixed and mastered by Phil Duke at Continental Studio in Long Island City, NY. 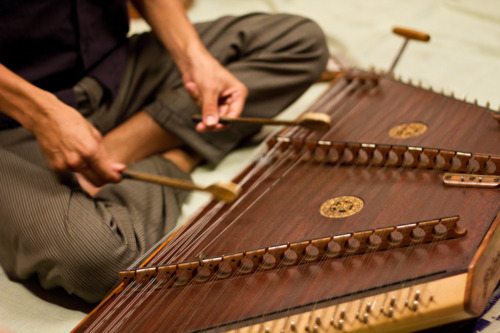 Lauded as the “Jimi Hendrix of Hammered Dulcimer” by NPR, and a “Force of nature” by NY Music Daily, Max ZT is an innovator of the instrument. Taking his roots from classical Irish folk music, Max has transplanted his compositional techniques to both Senegal, where he studied the Mandinko technique with the Cissoko griot family, and to Mumbai, India, where he received a grant to study under the great santoor master Pandit Shivkumar Sharma. His fresh perspective and bold experimentalism have been the backbone to beautiful, complex, and genuine compositions, while his unorthodox playing style has been a pioneering force in revolutionizing dulcimer techniques.

Max has enlivened the conceptual framework of traditional folk music by fusing multi-cultural roots and traditions to create a truly compelling sound.

Max ZT has shared the stage with some of the most influential international and national musical leaders of the century including Pt. Ravi Shankar, Jon Bon Jovi, Karsh Kale, Bela Fleck, Victor Wooten, Tinariwen, Jimmy Cliff, and more. With his eighth record released, he is, as Timeout NY states “A sight to behold.”

MaxZT is based out of Brooklyn, New York, and in 2005, won the National Hammered Dulcimer Championship. He’s recorded with a vast array of artists across musical genres, ranging from Victor Wooten, to The Goo Goo Dolls, to 2012 American Idol Phil Phillips, to Of Montreal.