Here’s what Manoj says about the performance: “Raag Megh -also called Megh Malhar- is a seasonal Raag, sung typically during the rainy season. That’s the reason why the compositions which are based on this raag are worded according to the rainy season. I’ll be presenting 2 compositions: one in a 10 beat rhythmic cycle, which we call Jhaptaal, and this is going to be in middle tempo. The second composition will be in a 12 beat rhythmic cycle, which is Ektal. It will be in a faster tempo. Both of the compositions have words, which talk about the rainy season and the feeling that everyone gets when the rains come after the heat of the summer.” 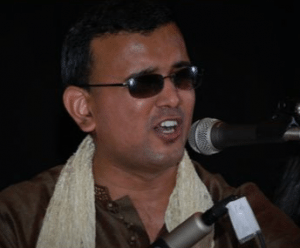 Manoj found his calling in music early on in life. He began his formal training at the age of seven, though his initiation was even earlier when he was all of three, singing bhajans while on a pilgrimage to Shirdi. By the time he was eleven, he was learning Hindustani music professionally under the tutelage of Mrs. Vineeta Tembe. His mentors include Mr. Prabhakar Karekar and Mrs. and Mr. Prem.

A rank-holder and a gold medalist from Mumbai University, Manoj completed his Master of Fine Arts in Hindustani Classical Vocal Music in 1999. He was the recipient of Pandit Bhimsen Joshi scholarship Hindustani music at post-graduate level in 1998-99. He has won several awards, the most prestigious one being the Sur Singar Samsad Award in 1995 for light vocal.