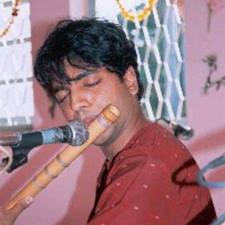 An outstanding disciple of the world renowned bansuri maestro Pandit Hariprasad Chaurasia, Jay is an avid performer with a remarkable artistic maturity and depth. With performances spanning the globe, he has been lauded for his musical sensitivity and expressive sound. His music reflects the training he has received from some of the greatest living masters of the North Indian Classical flute. Initially trained under Pandit Ronu Majumdar, Pandit Vijay Raghav Rao and Pandit Raghunath Seth, he is truly blessed to presently be studying under the living legend of the bansuri, Padma Vibhushan Pandit Hariprasad Chaurasia, at Brindavan Gurukul in Mumbai, since 2006. In addition to his solo performances, he has also had the honor of providing accompaniment on bansuri for some of the most highly esteemed Hindustani Classical musicians of today, all of whom have given him invaluable guidance towards his musical growth. They include Pandit Hariprasad Chaurasia, Pandit Nayan Ghosh, Pt Ronu Majumdar, Pt Raghunath Seth, Pandit Vidyadhar Vyas, Pandit Ramakant Pathak (pakhawaj), Smt. Kum Kum Sanyal, and Smt Sangita Lahiri. (vocalist). His musical pursuits are not limited to that of the Indian sub-continent and he has grown up with a great love for the music of the African diaspora and America’s classical music – Jazz as well. In 2004, he completed an Individual Major in Jazz Performance at Oberlin College/Conservatory of Music (Ohio), studying privately under such Jazz luminaries as the saxophonist Gary Bartz and trumpetist Marcus Belgrave. He has since collaborated extensively with many noted Jazz musicians including composer/Jazz pianist Courtney Bryan and trumpetist Lech Wierzynski. A recipient of the prestigious American Institute of Indian Studies Senior Performing Arts Fellowship, he currently splits his time between New York City and Mumbai, India.

Nitin Mitta is one of the most accomplished and distinctive tabla players of his generation, with a reputation for technical virtuosity, spontaneity, clarity of tone, and sensitivity to melodic nuances.

Apart from being a dynamic soloist, he is a highly sought after accompanist who has performed with some of India’s most celebrated Hindustani classical musicians, including Pandit Jasraj, Dr. Prabha Atre, Pandits Rajan and Sajan Mishra, Pandit Vishwa Mohan Bhatt, and Ustad Shahid Parvez, as well as many Carnatic musicians, such as Lalgudi G.J.R Krishnan and Lalgudi Vijayalakshmi.

Nitin has also made a mark as a versatile collaborator in other spheres. He recently joined forces with 2010 Grammy Nominee Pianist Vijay Iyer and electric guitarist R. Prasanna to produce a studio album titled Tirtha that blends elements of contemporary jazz with the North and South Indian traditional ragas and compositions. Another collaboration with R. Prasanna can be heard on the soundtrack of the Oscar-winning documentary Smile Pinky. He has also performed and toured with singer and Juno Award nominee Kiran Ahluwalia.

Born in Hyderabad in 1975, Nitin received his early training in Hyderabad from Pandit G. Satyanarayana. Blessed with raw talent, he gave his first solo tabla performance at the age of ten. During his studies he won many accolades, including first prize in the All India Competition held in Calcutta. To expand his repertoire of tabla compositions, he sought the guidance of Pandit Arvind Mulgaonkar of Mumbai, one of the most highly respected mentors of his generation.

Under Mulgaonkarji’s tutelage, Nitin not only broadened his tabla vocabulary, but sharpened his understanding of how to bring the material to life in performances through interpretation, improvisation and respect for the dynamics between instrumentalist and rhythmic accompanist. Both of Nitin’s gurus are disciples of the late Ustad Amir Hussain Khan Saheb, legendary doyen of the Farukhabad Gharana.

After moving to the United States in 2002, Nitin received a grant from the Rhode Island State Council on Arts. He was a member of the faculty at the Learn Quest Academy of Music in Waltham, MA. He maintains a busy schedule of performances and tabla workshops, traveling throughout the U.S, Europe, Canada and India. He has performed at several prominent venues including the Metropolitan Museum of Art, the Weill recital Hall/Carnegie Hall, the UCLA Royce Hall, the Indian consulate in New York, the Smithsonian Museum in Washington, D.C, the Music Academy in Chennai, and the Habitat Centre in New Delhi.