Performed 6-7am during our 24 hour Ragas Live Festival 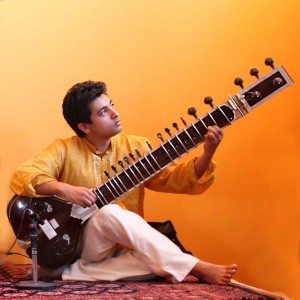 Indrajit Roy-Chowdhury is a disciple of the sitar maestro Pandit Subroto Roy-Chowdhury.  Groomed in the Veen-kar style of the Senia Gharana, which maintains the Dhrupadi origins of Indian Classical music, Indrajit strives to innovate while keeping a firm connection with the past.  While completing his undergraduate studies at Duke University, Indrajit received the Bennenson Award for the Arts to further his study of Indian Classical music.  Since then he has taken the profession of a full-time sitarist and has performed on stages across the world including such prestigious venues as Gyan Mancha (Kolkata), Hammerstein Ballroom (New York), Kennedy Center (Washington D.C.) and has had his
concerts telecast by Doordarshan (Indian National Television).  During the 2010 Fall semester Indrajit was a visiting faculty member at the University of Pennsylvania and taught the University’s sitar course..