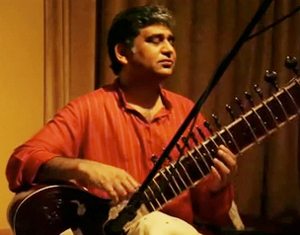 Ustad Ikhlaq Hussain Khan is a virtuoso sitarist from a centuries-long line of influential musicians of the Delhi Gharana, dating back to the very creator of the instruments ‘sitar’ and ‘tabla’ in the early 13th century, Sufi Saint Hazrat Amir Khusrao.
While his lineage is known for their proliferative work in the field of tabla and rhythmic expression/composition, Ikhlaq’s grandfather, Ustad Ahmadi Khan, was the first to choose a different instrument, sarangi. In turn, Ikhlaq’s father, the eminent Ustad Imdad Hussain, chose to devote his musical life to sitar. Ikhlaq’s immediate family was relocated to Pakistan during partition, and still resides in Karachi.
Ikhlaq Hussain, now a resident of New York City, was granted permanent residency in the U.S. on the basis of his extraordinary music ability; a category reserved for individuals with unusually exceptional talents. This has been a testimony to his virtuosity. Ikhlaq Hussain has followed in the footsteps of his forefathers, captivating audiences worldwide with his highly artistic sensibilities and skillful playing.
Ikhlaq plays in the Gayaki Ang (or vocal manner of playing). It is perhaps the most difficult form of playing the sitar. It involves ‘sytematic use of pitch deflecting technique, where by pulling the strings across the frets and varying their tension, the player can produce intricate melodie phrases from a single stroke of the plectrum. Thus, emulating the human voice to a degree normally unattainable on plucked instruments’.