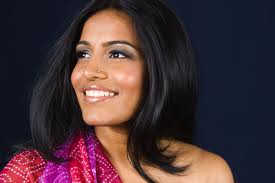 In her early years in Bombay, singer Falu (aka Falguni Shah) was trained rigorously in the Jaipur musical tradition, honing her talent for up to 16 hours a day at times. She later continued studying under the legendary sarangi/vocal master Ustad Sultan Khan – a mentorship that continues to drive and inspire her to this day. While pursuing a degree in North Indian classical vocal music she won gold medals in three national-level competitions centered around rising young classical talent.

Falu later moved to the States, and in 2001 began recording extensively with Boston-based band Karyshma as well as with Asian Massive leader Karsh Kale, subsequently hitting the nationwide university, club and festival circuits. Falu then formed her own New York-based band of the same name, and started performing at music venues throughout the city including Lincoln Center at a special Healing the Divideperformance for the Dalai Lama in 2003. Falu’s recordings were soon featured on multiple albums and compilations include on the compendium CD to Deepak Chopra’sThe Spontaneous Fulfillment of Desire.

In 2004 Falu was invited to perform as a soloist with Yo-Yo Ma’s Silk Road Project. In 2005 she was asked to serve as one of Carnegie Hall’s Musical Ambassadors to New York City – a position she continues to cherish with great enthusiasm. In May of 2006 she became the youngest South Asian vocalist to deliver a solo performance at Carnegie Hall (Zankel). Also in 2006 she joined the Born Into Brothels Ensemble (from the Academy-Award winning film), and in 2007 she collaborated with Wyclef Jean, lending her distinctive vocal style to the score of Angelina Jolie’s directorial debut A Place in Time.

More recently, Falu and her band were featured on National Geographic Channel’s Geo Sessions broadcast internationally, as well as on Fox TV’s Fearless Music, where the hit single Rabba became the first Hindi song ever performed on the national network.

During 2008 Falu began an ongoing collaboration with Jason Miles and DJ Logic in the contemporary jazz collective Global Noize with whom she toured extensively, performing live with Meshell Ndegeocello, Bernie Worrell (P-Funk), John Popper and other talented musicians. She contributed three standout tracks to their self-titled album released in Spring 2008 – her vocals in the album were singled out by Billboardas “ethereal” and “transcendent”. Other 2008 collaboration highlights included with Philip Glass and with Blues Traveler.

In 2009, Falu was invited to perform at Lincoln Center together with Slumdog Millionaire composer A.R. Rahman for the Time 100 Gala in front of the one hundred selection of Time Magazine’s most influential people in the world of 2008, which not surprisingly included First Lady Michelle Obama and Oprah Winfrey.

Finally, Falu’s most stunning recent performance occurred at the White House in November of 2009, where she was invited to sing alongside A.R. Rahman again at President Obama’s first State Dinner in honor of the Indian Prime Minister Manmohan Singh.

Deep Singh is a renowned percussionist, born in London England and currently living in NYC. Singh began to play the Tabla at the age three years old and at the age of seven became the youngest disciple of Ustad Allah Rakha. Singh’s professional career started at the age of nine and since has performed at prestigious venues such as The Royal Albert Hall, London; The Royal Festival Hall, London; The Waldorf Astoria, NYC, Carnegie Hall, NYC, among many others. Singh has accompanied the finest musicians from India such as Dr.Aruna Sharma, Ustad Salamat Ali Khan, Ustad Sultan Khan, Hari Harren, Ghulam Ali and many more. He is currently touring a concert of Indian classical music and working with other percussion bands.

After many years of playing in the NYC down town club scene and merging Indian sounds with rock/pop, he is now coming out with his own unique style of music. With his years of experience as an Indian classical musician and playing with western bands, Singh is revered as a master in blending music from the east and west.