Eric Fraser on Bansuri and Naren Budhkar on tabla performed noon-1pm on the 2013 Ragas Live Festival. 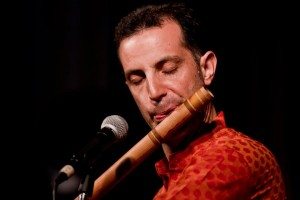 Eric Fraser is a disciple of Pandit Gopal Roy of Kolkata, India, a leading exponent of the Padmabhushan Pannalal Ghosh and Pandit Gour Goswami lineage. Eric’s “gayaki ang”or vocal approach to the bansuri flute is unique and rare, deep and sincere. Merging a healing breath with craft and musicality, Eric brings an exciting, meditative and moving performance. While at home in New York, Eric continues to perfect his art under the guidance of master musician Steve Gorn, a bansuri player from the same “Gharana” (lineage). Eric regularly performs Indian classical music on the bamboo flute in India and the USA, including much collaboration as an accompanist for dance and theatre. He has made contributions with his bansuri to music ranging from Hip Hop to children’s music. Besides flute, Eric Fraser is a music therapist (MA-BC), freelance teaching artist and singer/songwriter.  Check out his new album of lullabies,  Raga Bye Baby . 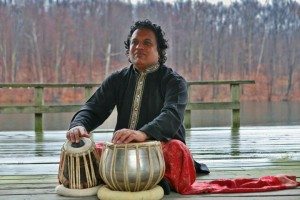 Naren Budhakar was born in Pune, India, and was first exposed to classical music by his father who was a violinist. From his cousin Shashikant Purandare he learned Delhi style percussion and began performing at a young age. He was initiated as a disciple by Tabla Maestro Ustad Shabbir Nisar. Naren has been performing and teaching both in the U.S. and abroad, lending his percussion skills to various forms of world music. He is on the faculty of the East-West School of Music, where he teaches Tabla classes and performs regularly.