7-8am during our 24 hour Ragas Live Festival. 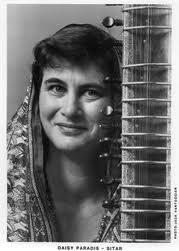 Daisy Paradis is one of the few Americans who can give a pure and authentic rendition of North Indian classical music. An outstanding musician in full command of her instrument, she has had the benefit of more than twenty years of training with one of the greatest artists of India, Maestro Ali Akbar Khan. Her depth of knowledge and devotion to music is coupled with rigorous classical training. Her interpretation is enlivened by an individuality and spark of energy that fills her performance with excitement.

Daughter of jazz harpist Daphne Hellman and sister of guitarist Sandy Bull, Paradis has been a disciple of Maestro Ali Akbar Khan since 1966. She has studied sitar with Krishna Bhatt, as well as attending workshops with Pdt. Ravi Shankar and Nikhil Banerjee. Her vocal studies were with Maestro Khan and Prof. A.T. Kanan of Calcutta. She is a co-founder of the Ali Akbar College of Music in California with Maestro Ali Akbar Khan, and served on the Board of the India Festival in San Francisco.

Paradis has appeared in performance with Maestro Ali Akbar Khan and Swapan Chaudhuri. Among her many concerts have been performances at San Francisco State, the Oakland Museum, the World Music Network, the World Music Institute, the Metropolitan Museum of Art, the New York Natural History Museum, programs of the Ali Akbar College, and a number of appearances on KPFA, and many other radio and television stations. She performed as part of the India Festival in California, and was invited in 1989 to perform for the Bharatiya Vidya Bhavan’s Nehru Centenary celebration.

“One of the best of the sitar students to come from Ali Akbar Khan… she has had many years with one of India’s finest musicians behind her. …her technique is fully developed…. her dedication is commendable…. an artist with a real statement to make.” – Soho News