The Book of J, Jeremiah Lockwood and Jewlia Eisenberg, stopped by the apartment for a beautiful  acoustic set.

They perform music from all over the world to and our celebrating their new album and their month long residency at Barbes. 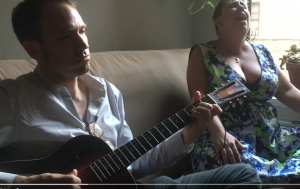 Jewlia Eisenberg works at the intersection of voice, text and diaspora consciousness, primarily as the leader of the ensemble Charming Hostess. Her music is mostly released on the Tzadik label Radical Jewish Culture imprint. Recordings include Sarajevo Blues on Bosnian resistance poetry and Trilectic on the political-erotic world of Walter Benjamin. She often works in immersive installation, making hybrid spaces that incorporate music performance, visitor participation, and experimental ritual. Installations include Teraphim (Meridian Gallery) on household gods; and The Bowls Project (Yerba Buena Center for the Arts) on Babylonian women’s amulets. Jewlia’s work has been curated into the Contemporary Jewish Museum in SF and the Museum of Peace in Uzbekistan; she performs regularly in Europe and the Americas. She has been a visiting artist at CalArts, MIT, and the University of Colorado, where she has taught on the boundary lands holding music and critical theory. Her interests include class war and knitting. Brooklyn born and bred, she now calls Oakland home. For more: www.charminghostess.com.

Jeremiah Lockwood’s music career began with over a decade of apprenticeship to the legendary Piedmont Blues musician Carolina Slim, playing in the subways of New York City. He also trained under his grandfather Cantor Jacob Konigsberg and performed in his choir. Jeremiah’s band The Sway Machinery seeks inspiration from diverse realms of experience related to the cultural geography of New York City. The Sway Machinery has played around the world, including stints at legendary music festivals like Montreal Jazz, Roskilde, and perhaps most notably, Festival au Desert in Timbuktu, Mali. In addition to leading The Sway Machinery, Jeremiah toured for years as guitarist in the popular world-beat band Balkan Beat Box and has scored numerous film and video projects. Jeremiah was a recipient of the 2007-8 Six Points Fellowship for Emerging Jewish Artists, was 2010 Artist-in-Residence for the Forward and was a 2011 Brooklyn Philharmonic Orchestra Composer Fellow. Jeremiah is currently working on a PhD in Education and Jewish Studies at Stanford University. His recent recordings include a solo album, entitled LOCKWOOD, a new record from The Sway Machinery entitled Purity and Danger and, most recently a collaboration with the Brooklyn-based independent community Because Jewish, entitled Kol Nidre. For more www.swaymachinery.com.