This was an amazing experience. We got to hang in the studio with two legends of Afro-Cuban Jazz: Bobby Carcassés and Arturo O’Farrill! After the two recorded an improvised set we got to sit down and talk music. We also get to hear some music from Bobby’s record celebrating his 50 years of creating music in Havana and NYC: 50 TH Aniversario, De La Habana A Nueva York. 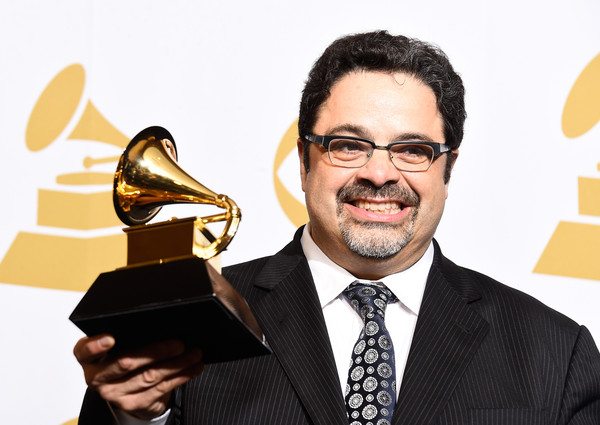 ARTURO O’FARRILL, pianist, composer, educator, and founder and Artistic Director of the nonprofit Afro Latin Jazz Alliance, was born in Mexico and grew up in New York City.  His debut album with the Afro Latin Jazz Orchestra, Una Noche Inolvidable, earned a first GRAMMY Award nomination in 2006. His next album Song for Chico, earned a GRAMMY Award for Best Latin Jazz Album in 2009.  The 2015 release of The Offense of the Drum was yet another Grammy Award winner.  Arturo was, in addition, the winner of the Latin Jazz USA Outstanding Achievement Award, and a Cubadisco Award for The Offense of the Drum in 2015. His newest album release (August 21, 2015) is Cuba:The Conversation Continues on the Motéma label. This album’s Afro Latin Jazz Suite  was warded the 2016 GRAMMY award for Best Instrumental Composition.

Arturo received his formal musical education at the Manhattan School of Music, Brooklyn College Conservatory, and the Aaron Copland School of Music at Queens College. As his professional career began to expand, Arturo was the pianist with the Carla Bley Big Band from 1979 through 1983.  He then went on to develop as a solo performer with a wide spectrum of artists including Dizzy Gillespie, The Fort Apache Band, Lester Bowie, Wynton Marsalis, and Harry Belafonte.

BOBBY CARCASSES – Born into a Cuban family (his maternal grandfather worked as a diplomat in Jamaica at the time of his birth), Carcasses moved with his family back to Cuba aged four, where he was surrounded by the various forms of local music. However, he started out as an opera singer before switching to Cuban music and working as a vocalist at the famous Tropicana nightclub. It was here that he first began to experiment with incorporating scat and bebop influences into his vocal style. By 1960 he was also known as a dancer and athlete (he was Cuba’s Long Jump Champion for that year) and as a multi-instrumentalist (playing trumpet, bass, congas and drums). Later in the decade he travelled, including a year in Paris playing with resident jazz greats Bud Powell and Kenny ‘Klook’ Clarke.

On his return to Cuba Carcasses formed his own jazz group, as well as acting in films and television. In 1980 he organized the first Jazz Plaza Festival, bringing to Cuba a host of international artists including Dizzy Gillespie, Charlie Haden and Airto Moreira. The festival became an annual event, with Carcasses and his band performing each year. He also toured extensively throughout Europe and the USA, performing alongside Tito Puente, Eddie Palmieri and many other big names of Latin jazz. Jazz Timbero was recorded in Havana in 1997 with an all-star Cuban big band (including members of Irakere and Los Van Van), playing a funky mix of Latin and jazz. His son is Roberto Carcasses the jazz pianist.