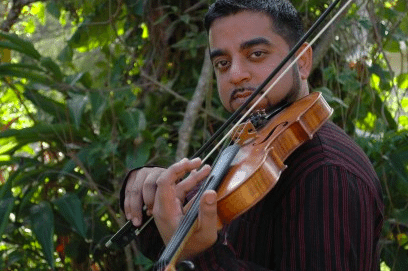 Arun Ramamurthy is a gifted violinist who is making his mark in Indian Classical and World music in the United States. Disciple of Dr. Mysore Manjunath & Sri Mysore Nagaraj, he has become one of the most sought after violinists in the US.  Arun has carved a niche for himself in the Indian Classical music scene in NYC as a versatile musician, playing together with artists from both Carnatic and Hindustani styles.  Born and raised in the US, Arun utilizes his Carnatic training to collaborate with western musicians, recording & performing with artists from various genres. Arun released his debut Carnatic CD “Geethanjali” with percussion stalwarts Thiravarur Bakthavatsalam and Giridhar Udupa.  His newest project, the Arun Ramamurthy Quartet, presents fresh arrangments and improvisations of classic Carnatic compositions, including some original music.  Arun curates the innovative series, “Carnatic Sundays” at Cornelia Street Café in New York City, a concert series dedicated to presenting Carnatic music to wider audiences. –arunnj25@gmail.com