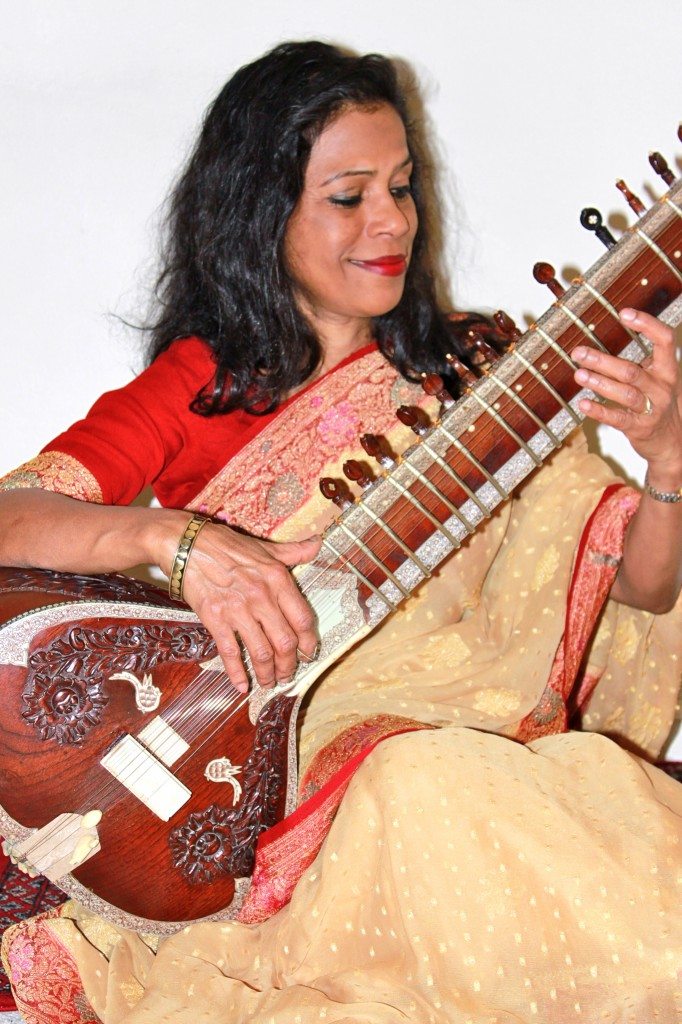 Anjana Roy and Michael Lukshis performed Raga Ahir Bhairav from 5 to 6 am on the Ragas Live Festival.  As well as being a great musician Anjana is the author of Acharya Ustad Allauddin Khan: Musician for the Soul

Anjana Roy comes from Delhi, India, where she had her early initiation in music under Shri Rebati Ranjan Debnath, her father and guru, who was a disciple of Ustad Allauddin Khan of Miher. Later she learned from several masters of the art. Anjana earned her Master’s in Arts (instrumental music-sitar) from Banasthali Vidyapith of Jaipur, Rajasthan under the guidance of Shri Rameshwar Dayal Verma. She continued her training under Shri Sachin Datta (disciple of Ustad Allauddin Khan) in Delhi. Afterwards, Ms Roy received the degree of Master of philosophy (instrumental music-sitar) form the University of New Delhi, under the guidance of Pandit Debu Chaudhuri. She further studied sitar with Pandit Manilal Nag, and later Shri Prasanna Kumar Singh, a disciple of Pandit Manilal Nag. Settled in New York, Ms. Roy has taught sitar music at the Shikshayatan Cultural Center in Queens, New York, and has performed at the Queens Conservatory of Music, Brooklyn Public Library, International house, the Indian Consulate and in many private concerts. Currently Ms. Roy is studying under the tutelage of Shri Parimal M. Sadaphal from Delhi, who is a senior disciple of Pandit Ravi Shankar and one of the foremost sitarists of India. Ms. Roy released a CD of India Classical Music on sitar featuring Raga Bageshree in the year 2006.

Michael Lukshis is originally from East Brunswick, NJ. He holds a B.A. in Music from Rutgers University, and is a dedicated disciple of Pandit Divyang Vakil. In addition to his tabla performances as a soloist and accompanist in the US and India, Michael has performed with several New Jersey-based bands, such as Natural Breakdownand Amber Blues.  He has also performed with Glen Burtnik and Friends at the State Theater in New Brunswick, NJ and Symphony Space in New York, NY.  Furthermore, Michael is an accomplished guitar player and is the guitar instructor at the Taalim School of Indian Music.