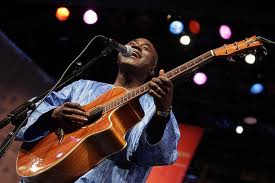 By Banning Eyre | April, 2007 [guitar player mg]
Abdoulaye Alhassane Toure has brought string-picking wizardry from the desert towns of West Africa to the nightclubs of New York City. Born in 1963, in Niamey, Niger, to a Sonrai family from Gao, Mali, he passed his youth in a multi-ethnic neighborhood surrounded by Peul, Bambara, Sonrai, and other peoples, and as he put it, “They all played music.” Local radio filled his ears with the sinuous, bluesy strains of desert folklore and the melodious bombast of Mande griots. When his parents returned to Mali, Toure recalled, “They came back with cassettes by Ibrahim Hamma Dicko, Fissa Maiga, and Ali Farka Toure, who sang in a language we understood, and I was incredibly inspired by the originality of this music.” Toure’s musical gift became obvious when he started hanging out in the Niamey nightclub where his uncle, Johnny Ali Maiga, led a band.
“Johnny Ali Maiga played folklore, like Ali Farka Toure,” said Toure, “But he also loved rock. His group was on the radio in Niamey, and it sounded like the Malian music I was listening to at home, but sung in Zerma, the national language of Niger.”
By the early ’80s, Toure was playing guitar and flute, and his first band incorporated electric guitar, bass, drums, and brass, and merged regional folk styles with international pop. When the group took first prize in a national competition, Toure became a full-time musician. By the late ’80s, he was leading Super Kassey—the first Niamey band to travel abroad and record in a modern studio.
Before long, Toure was working as a guitar instructor at the European-run Center for the Education and Promotion of Music. In 1992, Toure teamed up with singer/flutist Yacouba Moumouni to create Niger’s most successful roots pop band to date, Mamar Kassey. Mamar Kassey’s two electrifying CDs, Denke Denke (1999) and Alatoumi (2000) showcase Toure’s guitar mastery and formidable arranging skills. The music is rooted in tradition, but molded into brisk arrangements that include key modulations and bursts of solo improvisation.
“Improvisation existed in Sonrai music,” explained Toure, “but in another form. In our ceremonies, there’s an original melody that is played by the kurbu [a 3-stringed lute]. When the energy rises between the players and the dancers, the kurbu player leaves his melody, and follows his heart. But if you tell that kurbu player to work with a modern group and ‘improvise,’ you have to explain to him what it means.”
Mamar Kassey’s travels eventually brought Toure to New York City, where he now lives and performs with his current band, Deep Sahara. Toure can cradle an acoustic guitar and fingerpick his way through desert trance grooves, and he can also take up a flatpick, and wail on electric—edging desert folklore into the realm of blues and rock. One day, he plans to return to Niger to set up a studio and form an international touring band. For now, Toure is merely one of the most riveting African guitarists to be found in the United States. 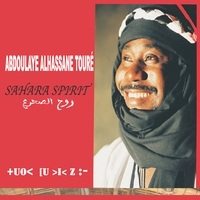